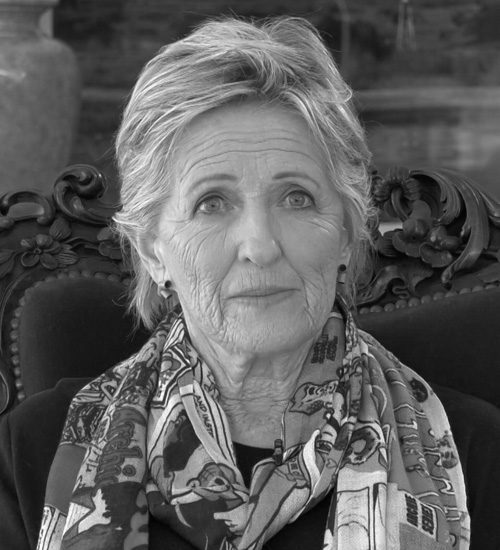 “…Of the Performing Arts Councils: We were spoilt, we had funding, permanent jobs, I am sorry they went, but I do understand why…”

Penny Simpson has come full circle. She studied Fine Art at UCT and fifty years later she is again plying her brushes, painting portraits of actors she has known and worked with after fifty years in the theatre.

After varsity she went to London and fell under the spell of an extraordinary woman, Margaret Harris, who had started a theatre design course at Sadler’s Wells Opera, called Motley Theatre Design (Motley: the Shakespearean for harlequin).

She returned to South Africa and took an appointment at CAPAB. It was 1971, the Nico Malan’s opening year; theatre was abuzz with creatives. She was given her first assignment, costumes for Hadrian VII, an ecclesiastic costume piece … research – design – execute. Fabrics were flown in from Switzerland. Her career had begun and an enviable career it was to be. It gave her the opportunity to design sets and costumes for major musicals, dramas, opera… She remembers those days of the Performing Arts Councils; although their demise might have been inevitable, they remain a tragic loss as a resource to a new struggling nation. The Magic Flute, Aida, Anthony and Cleopatra were some of the productions she worked on, grand scale pieces to match the best of Covent Gardens or the Metropolitan; now only faded memories.